"Cloud of Trust" in a typical city.  Red dots represent interviewees from leaders in business, city government, and neighborhoods.  Blue dots represent "trusted others."  Cities vary widely in the tightness and spread of connections among leadership elites. 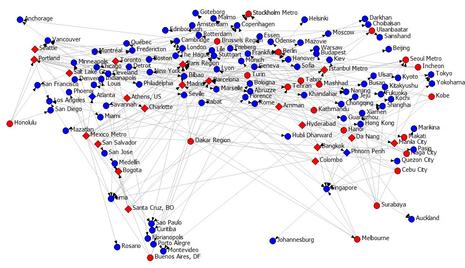 Tim Campbell is a researcher, author, speaker, and writer covering city affairs and urban development around the world.

His most recent book, Beyond Smart Cities-- How Cities Network, Learn and Innovate was published by Routledge/Earthscan in 2012 and has been issued in Chinese and Spanish.

Campbell speaks frequently at conferences, seminars and universities about city learning and urban development.  His most recent appearances were at Hyderabad, Medellin, Atlantic Council, Seoul, and the Haas School of Business at U.C. Berkeley. Contact him at timcampbellphd@gmail.com.

He has been consultant to major institutions including the World Bank, Inter-American Development Bank, United Nations, UCLG, Metropolis, cities, engineering companies, and others.

Areas of expertise include city learning and innovation, institutional development, evaluation of project impacts on the poor, and decentralization.

He holds degrees Political Science and City and Regional Planning from U.C. Berkeley (1970), and a Ph.D. in Urban Studies and Planning from M.I.T. (1980). 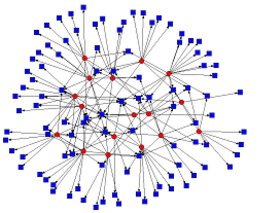 Graphical representation of city-to-city visits in 2001-2003.  Red dots are visitors; blue dots are hosts.  From ​Beyond Smart Cities